The single best thing you can do for the long term health, quality and maintainability of a non-trivial software system is to carefully manage and control the dependencies between its different elements and components by defining and enforcing an architectural blueprint over its lifetime. Unfortunately this is something that is rarely done in real projects. From assessing hundreds of software systems on three continents I know that about 90% of software systems are suffering from severe architectural erosion, i.e. there is not a lot of the original architectural structure left in them, and coupling and dependencies are totally out of control. 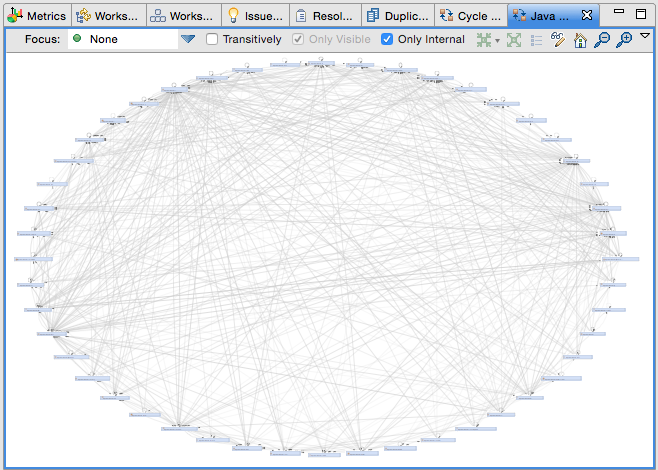 The screenshot (Sonargraph-Explorer) shows how dependencies got out of control in the Apache Cassandra project, which is still a relatively young open source project. There are 57 different packages in the project, and 48 of them are so tangled that whatever architecture might have existed in the early stages of the project is now completely unrecognizable in the code. That does not mean that Cassandra is a bad piece of software, but it definitely means that it is hard to maintain or comprehend.

One of the many reasons for this is that usually there is nobody in the development team whose role it is to keep and eye on architecture and dependencies. This is kind of ironic because there is certainly no lack of people with the title “software architect” in their job description. Another reason is that, with the wide adoption of agile development processes, architecture is more and more considered as a by-product of the implementation of user-stories. If all the focus is on “visible” features there is not a lot of capacity left to take care about invisible properties like architecture and technical quality of code.

All this leads to a growing accumulation of the most toxic form of technical debt, architectural debt, and it comes with a painfully high interest rate. The unfortunate side effect of this is that it becomes more and more difficult to add new visible features without breaking something. If you neglect dependency management long enough you will reach a point of no return. Your system will become so tangled that the effort to repair its structural deficiencies will become prohibitively expensive. Then you will have to live with the mess for the remaining lifetime of the system, which usually is not a lot of fun. The stakeholders will notice instability, high maintenance cost and ridiculously high cost for adding or changing features. The development team will be under increasingly high pressure which will further deteriorate the situation.

How to set up an architecture

Mastering the architecture of a complex software system is like ruling an empire. Divide and conquer is, therefore, an excellent strategy. To define an architecture you will have to partition your system into smaller units and then describe how these different elements can depend on each other.  I will call the atomic unit of architecture a “component”. In Java a component would be a single Java file, in C++ it would be the combination of a source file and its related header file.

The first level of structuring components is to group related components into “packages”. Conveniently Java already offers this concept, in C++ or C# you could combine the usage of namespaces and physical directories to emulate packages. Upward from the package level, the architecture depends on the kind of system you are creating. For a classical enterprise application you will probably need layers to separate technical aspects and slices that cut through the layers to separate functionality. For other kinds of systems it might be enough to define just a couple of subsystems. 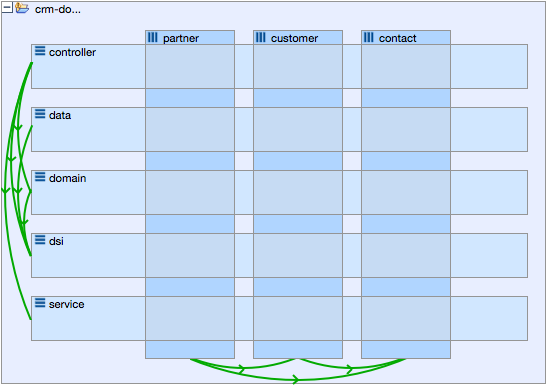 Architectural model with layers and slices

Architectural model with subsystems only

No matter what your architecture looks like, it is always a good idea to express architectural grouping in your package names. This way you will know exactly where a certain package belongs in your architecture by just looking at its name.

Possible naming conventions could be:

For C++ or C# you can achieve the same thing by using a combination of nested directories and namespaces.

The good news is that it is always possible to break up cyclic dependencies using simple software craftsmen techniques like adding interfaces or rearranging classes or methods. DZone’s refcard #130 describes a couple of those techniques in detail.

Unfortunately, most developers are not aware of the adverse effects of cyclic dependencies. And even if they are, it is difficult to detect cyclic dependencies without tool support. You will need tools to automatically detect architectural and structural problems early so that they can be fixed while it is still easy to fix them. More about that later.

Benefits of loving your architecture

If you consider that 70% to 80% of the total lifetime cost of a typical software system occurs during the maintenance phase, it becomes obvious that making maintainability easy will save a lot of money. Ease of maintenance is directly coupled to the architectural integrity of the system, and the amount of technical debt that has accumulated in it. By minimizing technical debt with a focus on architectural debt and by enforcing an evolving architectural blueprint over the lifetime of a system, total cost can be reduced by 25% or more.

Here are some of the benefits you get from keeping your architecture clean:

Keeping your architecture clean is easier than you think, provided you put some effort into it on a regular basis and fix violations while they are still easy to fix. The first thing you need is a packaging concept and naming strategy that reflects your architectural model. Then you must avoid cyclic dependencies between packages and make sure not to create monster packages with hundreds of components in them. This alone will make sure that it will be possible to assign your packages to higher level architectural elements like subsystems or layers without introducing cyclic dependencies on the higher levels. It is also a good idea to avoid cyclic dependencies between components whenever you can.

For Java there are free tools that automatically detect package cycles, e.g. JDepend or SonarQube. If you want more comfort and he ability to define and enforce architectural blueprints you will need a commercial tool like Sonargraph (shameless plug).

5 thoughts to “Love your Architecture”